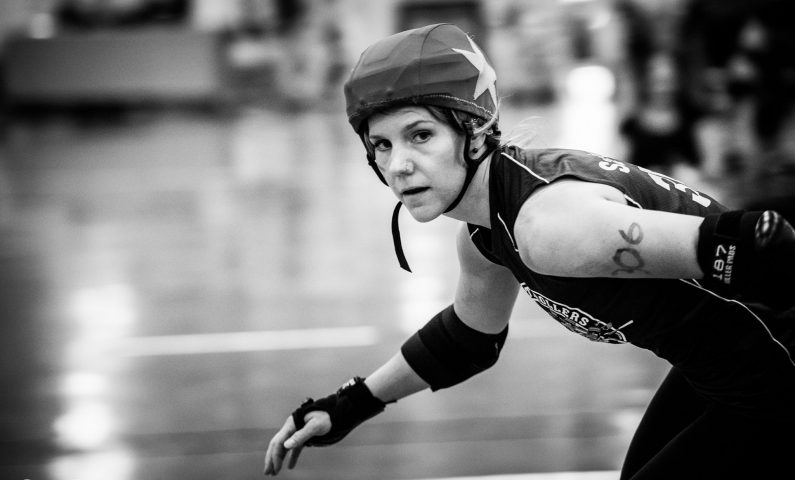 What happens when you take a former speed skater, put her on quad skates, and teach her how to block? A community is taken by storm as an incredible roller derby player with a competitive edge and fluid style prepares to advance to the national stage.

Kylie Morin, 27, literally launched into the roller derby scene as a “jammer” nearly three years ago, jumping the apex to avoid the bruiser blockers who stood in her path. The fast-paced contact sport came naturally to the former national-level speed skater, who first discovered roller derby in British Columbia’s West Kootenay region. This month, after much dedicated training and networking, she earned her way onto Team Canada’s Development Squad.

The jammer position Kylie plays is integral, as she’s the skater on the track who scores points for her team by lapping the opposing team’s skaters. The Saskatoon native counts herself lucky to have been selected to train alongside Canada’s best as a development skater; the opportunity presented itself in October, when Team Canada Roller Derby held tryouts in both Rockland, Ontario and Calgary, Alberta. Sask, an old derby nickname she has recently shed in favour of Kylie Coyote, was at the Western tryout with a crew of her teammates from the Dam City Rollers out of Castlegar, B.C. She had a nothing-to-lose attitude, though she knew very well she had worked rigorously for the previous three months, combining early morning conditioning at the gym with running, mountain biking, and yoga to compliment her twice weekly hard-hitting derby practices.

“I was pretty skeptical at first, and I remember thinking, ‘How ridiculous is this for me to try out?’” she tells The Prevail Project. “I mean, I live in Rossland, and there are just tons of big derby teams in Canada. What were the chances they’d pick me?” 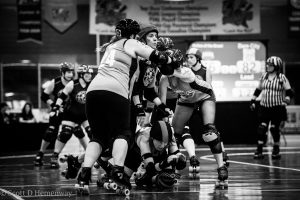 Team Canada Women’s Roller Derby recently announced its 28-person team, plus six development players, Kylie included. The development program was just introduced this year as a means of further expanding and promoting the sport across the country. They will train with the team and have full access to Team Canada coaching and resources, and in turn spread their new knowledge across five leagues which are otherwise not represented on the team.

The 28 players, who may be a part of Canada’s 2017 World Cup team, represent 12 roller derby leagues in Canada, the United States, and Finland. Only eight of these athletes have previous experience on the national team – a true testament to the quickly changing landscape of roller derby in Canada.

“At first I was a little bit disappointed that I didn’t qualify for the team because that would have given me the opportunity to play (at the World Cup),” Kylie admits. “But at the same time, I don’t have the high-level WFTDA (Women’s Flat Track Derby Association) playoff experience that almost everyone on the team does. “That being said, I’m super stoked that I have the opportunity to practice with the best players in the country.”

Kylie competes in roller derby because she loves to skate; it’s fun and she loves to learn and share her knowledge of the game. She’s the first to teach someone a new skill, but also the first to knock a player down with a sideways smile, according to Dam City Rollers Captain Natasha Aelicks, otherwise known as Tonka Tash.

“I definitely thought she was a more veteran skater when I first saw her,” Tash recalls. After playing pickup games with friends in Alberta last summer, and sharing the track with international talent at RollerCon, a derby convention held annually in Las Vegas, Kylie’s derby passion and ability have both erupted. “She has really been excelling at her footwork and doing lots of juking and faking and lateral movement on the track,” Tash explains. “If all else fails, she can always revert to being that strong force that’s just going to break through those walls.”

In roller derby, walls are made up of up to four players (blockers) stacked side-by-side or in a dynamic formation with the purpose of knocking out the star-helmeted jammer to prevent her from earning points. These walls however aren’t just sitting idle; blockers have to watch out for the opposition attempting to bust players up to help their jammer get through.

The game has been likened in the past to playing speed chess while having bricks thrown at you – and there’s definitely some merit in that comparison. The sport has come a long way since the 1970s, when derby players still engaged in a degree of showmanship or staged theatrics.

The Texas Rollergirls were the first to embrace flat-track play in lieu of bank track in 2002; the sport began to further legitimize as it grew and other teams began to form and join the flat-track ranks. By 2005, the first all-female Canadian league – Oil City Derby Girls – was introduced in Edmonton and the fever began to spread like wildfire. There are currently 381 full member leagues and 66 apprentice leagues, according to WFTDA, the international governing body for the sport.

In Kylie’s short time on the track, she has witnessed the sport take off. “It’s definitely not about the ‘boutfits’ anymore,” she laughs. “People wear athletic clothing and a jersey – there is no dressing up in tutus now. I like that because I think it makes people take it a little bit more seriously. It’s now less of a show and more of a game.”

Kylie attended a boot camp in Revelstoke in April, where she happily found motivation as well as a network of players within the Chinook City Roller Derby League. The new friendships and experience gained sparked something inside her, and she reshaped her identity from a speed skater who found derby to one of the toughest up-and-coming players to watch.

“When I’m jamming, I kind of get in my little bubble and just like to skate circles and forget everything else that’s going on around me,” she explains. “I forget to look for my teammates – well, that’s sort of what I used to do.”

After joining the Kill Jills roster for Flat Track Fever, a tournament held this past May, Kylie has stepped up her game and now uses her teammates as well as her fast footwork to help slip through the blockers. “Now when I come up to the pack I yell, “Go, go, go!” and then all four blockers just swarm the other team to make holes and get them out of the way,” she says. “I can then come up and hopefully weave through the pack without really even touching anyone.”

Kylie spoke with The Prevail Project freshly returned from her first practice with Team Canada, which took place in Toronto; the weekend involved on-track team bonding during serious defensive and offensive training, as well as off-track activities like a downtown scavenger hunt and a team dinner. She is excited to share that she is starting at the Vancouver College of Massage Therapy in January, and will soon be playing with Vancouver’s Terminal City Roller Girls, ranked 18th in the world (http://www.terminalcityrollergirls.com/). We wish Kylie the best in this exciting sport as she cuts and hits her way through the pack in a quest to reach the top of the derby pile. For more on the Women’s Flat Track Derby Association, check our the website at: https://wftda.com/. 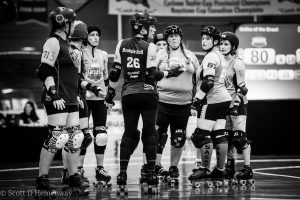