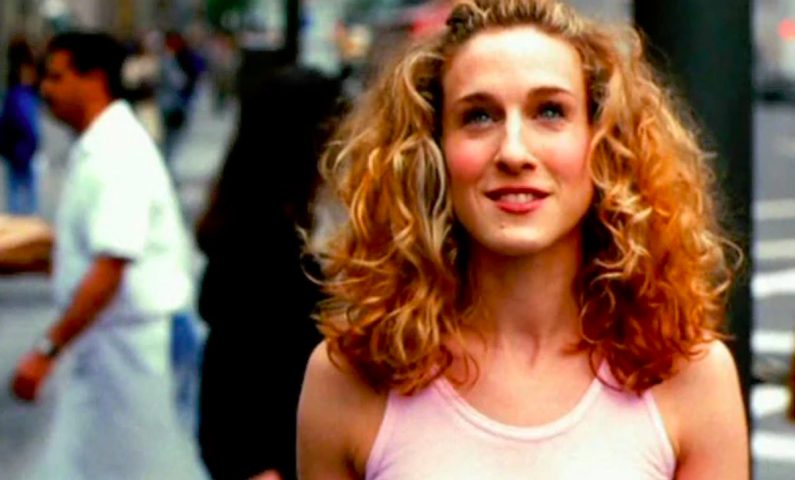 Carrie Bradshaw, as she always does, once posed this poignant question to her friends: “Are we sluts?”

No, wait — sorry. Not that question, the other question.
After Mr. Big just “couldn’t get out of the car”

she asked: “Will I ever laugh again?”

Laughter heals – literally. Studies show that a good belly laugh increases antibodies in the blood, which helps prevent infection. Moreso, it’s therapy for our general state of wellbeing. It boosts endorphin levels (much more fun than spinning) and reduces the stress hormone. In especially dark times or even in dark periods of history (like current times perhaps?) it gives us hope. Comedy brings friends together and spans miles and years alike with intimate inside jokes and remember-whens. And for the record, yes – I wish you would forget about that time we played Edward Fortyhands.

I would be hard-pressed to find a dating profile that hoped for an unfunny partner, but morbidly curious to go on that date in the name of anthropology. If you haven’t seen the Sex In The City movie, I won’t keep you in suspense; Carrie did laugh again. Charlotte York-Goldenblatt somehow knew that defecating in her yoga pants (albeit unwillingly) would be the kind of comedic gesture that would get Carrie back to her old self. The best takeaway from comedy is a reminder that to err is human and if we can’t joke about the human experience, then what the hell can we joke about?

An increasingly popular way to mock our experiences is through memes. Perhaps they literally get you through the day; maybe you do nothing but look at memes all day. No judgment – half the battle is just to look busy, right? The best are the ones that make us wonder if we’re being spied on. How do they know me so well? I also eat handfuls of shredded cheese in the kitchen at 2AM.

The popular Me_irl subreddit page is one such place for instances of self-realization, portraying behaviors that perfectly encapsulate human nature. The comments section for any popular meme will show you friends thinking of each other, tagging back and forth, and laughing at the realness of the relation of one’s self to “The Socially Awkward Penguin”. Togetherness through humor is a real win; it’s a relief, a break of sorts, and even a hilarious form of faith in humanity.

Speaking of faith in humanity – or lack thereof – let’s talk politics. Comedy in politics may seem like an annoying little sibling, constantly needing to be monitored and always asking for snacks. If this were literally true, comedians would be pleasantly plump these days; however, theirs is a symbiotic relationship. By general consensus, Saturday Night Live is better during an election year. Tina Fey’s incredible impersonation of former vice presidential candidate Sarah Palin was so hilarious it almost made me like Sarah Palin. At the White House Correspondents’ Dinner, one comedian dares to eloquently deliver the cleverly executed free speech that we all wish we could. For once, we have an ally at the podium. In the United States, a nation where free speech is often threatened, the skill of a well-executed joke is a delight. Bravo Michelle Wolf, who took on the current administration this past April – albeit not without controversy.

“Michelle was too harsh.”

Forget the first amendment, right? It’s just the first amendment. Turn this hysterical(ly) funny woman’s mic off! The reaction was overkill. Plus, Michelle’s reputation preceded her; President Trump wasn’t even in attendance. That being said, my only criticism: tearing down another woman on her makeup skills? Not cool, Michelle! It’s okay, Sarah Huckabee Sanders. I, too, have never mastered winged liner.

You might be wondering how you can wield the sword of comedy to fight your own battles, whether internally or externally. Maybe you don’t believe you’re funny or maybe you were voted Most Likely to Be a Comedian by your high school graduating class of 75 people (a reputable source, no doubt). Regardless, it’s extremely unlikely you have no sense of humor at all, and whoever you are, I believe that everyone should take an improvisational comedy class. Trusting others and yourself to go with the flow for an hour or two once a week is a great lesson, and it’s an equalizer. Because guess what? You are going to look and feel really stupid. Really stupid. But it reminds you that mistakes are what make you human and the first rule of improv is always: yes, and…

Participate in humanity! Go ahead and make a fool of yourself for the sake of comedy; hopefully somebody will film it.