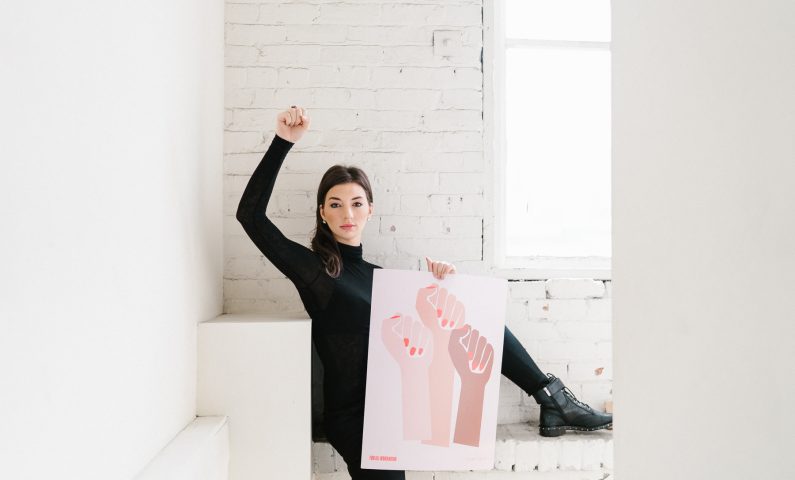 At this time last year a sea of pink knit pussy hats descended on Washington, supported and mirrored by sister-marches around the world. This marked a milestone for women and allies demanding transformative social change, and on January 20th & 21st people from across the globe unite once again to demonstrate at Look Back, March Forward events, including in Vancouver and Toronto.

The goal is to raise further awareness of sexual harassment and abuse, demand an end to violence against women and girls, and celebrate and strengthen a coalition that resists threats to human rights worldwide. It comes this year hot on the heels of the #MeToo movement.

When I was a child my 10-year old babysitter used to play a game where he’d round up the younger kids, put us in the closet and inappropriately touch our “bathing suit” areas. Even a group of innocent 5-year-olds figured out this didn’t seem right, so we kiboshed the game and reported it to our parents. The boy’s actions were dismissed as harmless curiosity and we heard that oft-used phrase, “Boys will be boys,” and went on to lives that were filled with similar or escalating experiences.

I always thought my experiences were insignificant, especially in comparison to some of the more serious or even brutal situations I’d heard about in the news or from friends. I dismissed these seemingly minor incidents; I felt fortunate to be in a position where I didn’t have it that bad. However, sexual abuse and harassment toward women has been culturally accepted at all levels for too long. Today I’m proud women everywhere are sharing their stories and coming together to take action.

If you participate in any kind of social media you saw the hashtag #MeToo go viral. Used to help demonstrate the widespread prevalence of sexual assault and harassment, it especially blew up following the public revelations of sexual misconduct allegations against Harvey Weinstein.

When actress Alyssa Milano tweeted, “If all the women who have been sexually harassed or assaulted wrote ‘Me too’ as a status, we might give people a sense of the magnitude of the problem,” it lit Twitter up like a Christmas tree. The tweet was posted more than 200,000 times by the end of the day and tweeted more than 500,000 times by October 16th. On Facebook, the hashtag was used by more than 4.7 million people in 12 million posts during the first 24 hours. The hashtag has trended in at least 85 countries, including India, Pakistan, and the United Kingdom.

The #MeToo movement spans many channels; it’s universal, regardless of race, sex, religion, culture and politics. Civil rights activist Tarana Burke created the “Me Too” movement in 2006 (yes, a time before hashtags) to help victims realize they weren’t alone, and although it took Hollywood to popularize it in 2017, it seems her mission has been accomplished.

While accepting the Cecil B. DeMille Award at the 2018 Golden Globes, Oprah’s speech drove many to tears. She acknowledged #MeToo and the related #TimesUp movements by congratulating those who speak the truth, admitting she was especially proud of women who have felt strong and empowered enough to speak up and share their personal stories.

“For too long, women have not been heard or believed if they dared to speak their truth to the power of those men,” she said. “But their time is up. Their time is up. So I want all the girls watching here and now to know that a new day is on the horizon!”

Her words were also viewed as political and what began as jokes and a hashtag – #Oprah2020 – has again escalated at breakneck speed. With established resources and an already dedicated following, will Oprah be the next celebrity in the Oval Office?

The power of social media has never been more apparent.

The conversation continues as people are woven together through the honest sharing of their experiences. But while each person listens and examines their part in this story, some don’t see where they fit. Stories featuring heart-wrenching truths, graphic and disgusting reports, and seemingly innocuous or common encounters all continue to flood social networks and the media, and they’re being met with everything from love to outrage to skepticism and even resistance.

Many men have also confronted the subject and some have publicly embraced their part by sharing their own stories or pledging action through yet another trending hashtag: #HowIWillChange.

We have a lot to ponder. As a woman, the questions circle: Have you been abused? What’s your story? Are you obligated to speak out? Do you belong to this movement? If not, where do you stand? What’s important is that while you examine your own feelings, keep the conversation going.

Sexual misconduct, abuse and harassment are complex, nuanced issues, but despite the further dissections to come the #MeToo platform should not be undermined; it’s allowed many women to feel supported enough to safely share and acknowledge the abuse that has previously silenced them. The dignity and empowerment that’s gained – not to mention the relief – is a huge accomplishment, but it’s just the start. As raising awareness and demonstrating continues, engagement and direct action becomes increasingly more important. The world is changing; be thoughtful, be open-minded, and find out where and how you can get involved: Women’s March Global  //  Time’s Up  //  Power to the Polls