There’s no right or wrong approach when it comes to creating, according to Vancouver-based designer RozeMerie Cuevas. After over 30 years in the fashion business, RozeMerie has also learned that a challenge always presents an opportunity; if you know what you want and face obstacles with controlled direction, at the very least you’ll gain valuable experience.

Her vision for living free, loving your life and empowering and inspiring others eventually reached the right communities and today she’s a successful entrepreneur as the head of JAC by Jacqueline Conoir.

The designer showcases her own style – chic, contemporary, sensual and detail-oriented – and speaks with her own voice through the JAC line. By putting her own story and perspective out there, and by eventually partnering with someone who shared her vision, RozeMerie has managed to triumph on an international scale.

But she remembers all too well being a scared young artist, hauling her line of clothing in garbage bags backstage at her first runway show. While more seasoned designers smoothly rolled their styles, encased in elegant garment bags, on professional-looking racks, the young dreamer felt overwhelmed and unprepared. It was there, hugging the toilet (when her nerves got the best of her), that RozeMerie accidentally eavesdropped on a conversation about the talented 18-year-old’s work and was able to rally as she realized, ‘hey that’s me – I’ve got this.’ She went on to jet to fashion school at ESMOD in Paris and never looked back – or, more accurately, looked back only occasionally during the decade or so of hard times that followed.

Working long, unforgiving hours to make a living as a fashion designer in Vancity, struggling in a market typically interested in European fashion or casual local ready-to-wear. RozeMerie stuck to her guns and forged through, building her reputation and repertoire under the Jacqueline Conoir Collection, which was essentially made up of female power suits and evening wear. 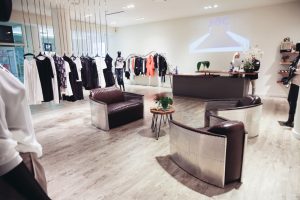 As she adapted to new market trends she eventually found herself modernizing her designs and launching contemporary fashion line JAC, which combines urban edge with feminine silhouettes. Change continued to unfold, and with a shifting local climate came a need to look elsewhere for manufacturers as the ones in closer reach relocated and diminished.

RozeMerie went back to the drawing board to reinvent her approach yet again; by establishing an investor to make her dream possible, she began working with a Chinese manufacturer, which led to establishing a presence in a brand new foreign market.

RozeMerie’s continued perseverance again served her well, as JAC has since done exceptionally well, opening more than 25 stores per year within three years doing business in China. Last year, a flagship store had JAC making a larger mark in Vancouver’s Oakridge Centre, a proud moment for RozeMerie, who sees her designs finally established and intertwined in Vancouver fashion years after first introducing her North American and European inspired clothing.

By the end of this year, JAC will have 130 locations across the world – a direct result of RozeMerie leading by example by designing garments, a business, and her own beautiful life on her own terms.